Bloomsbury Genetic Therapies is a new UCLB biotech spinout with ambitions to go far and fast. Formally launched in October, the company’s genesis stretches back much further, rooted in a decades-long collaboration between four UCL academics. Professors Paul Gissen, Manju Kurian, Ahad Rahim and Simon Waddington combine expertise in scientific discovery, translation and clinical insights. They now hope to leverage this powerful partnership for the benefit of patients suffering from rare genetic diseases.

Ahad explains: “That link between the fundamental science and treating patients in the hospital has been gold in terms of getting therapies towards the clinic. It’s been a wonderful working relationship, and the respect and support between us makes the path and process much more efficient.”

From gene discovery to genetic treatment

“For most of these conditions there are no treatments whatsoever,” explains Paul. “Or where there are therapies, patients are still getting a poor quality of life. So there’s a huge unmet need in these conditions, and that’s something we’re very aware of working first-hand with these patients and with the family associations for many years.”

The liver deficiency OTCD is challenging to manage – currently through a liver transplant or strict diet – resulting in major lifelong impacts for patients and huge costs. Meanwhile, the three neurological disorders DTDS, NPC and INAD share the characteristics of causing loss of motor symptoms and very reduced life expectancy for sufferers.

DTDS was discovered by Manju a little over a decade ago, and was previously often misdiagnosed or mistaken for cerebral palsy.

“Children with the condition have very severe problems, and nearly all affected patients are not able to walk or talk. But cognitive assessments suggest they have good understanding. From being able to prove that this was a genetic condition rather than cerebral palsy due to brain injury, we’re now at the point where we are planning clinical trials for a potentially curative treatment. So it’s a hugely important development for these children and their families.” 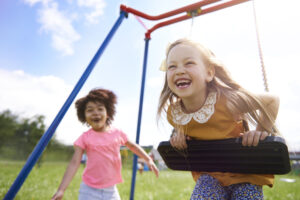 Building on what works

The principle behind Bloomsbury’s approach is building on what works. CEO and co-founder Adrien Lemoine believes it will prove to be another asset in accelerating the journey to market.

“Our ethos is to use what’s working already in gene therapy and if it’s not broken don’t try to fix it. We’re using capsids that have been brought to the clinic already by others, so we can borrow and lean on regulatory and manufacturing experience. Innovation comes from the assembly of the promoter, transgene and capsid and the choice of the route of administration.”

Bloomsbury’s programmes also rest on years of data, which have both established the promise of these treatments and fuelled its founders’ hunger for rapid progress.

“For many years, we were working in mouse models,” says Simon. “We got to the point where a single injection would cure a lethal genetic disease. But of course it’s all pointless if you can’t get the thing to the clinic.”

Unusually for such a young entity, Bloomsbury is already close to being a clinical stage company, with an application for a clinical trial authorisation being prepared for filing with the UK Medicines and Healthcare products Regulatory Agency for its liver disorder programme, which it’s hoped will start treating patients early next year. The remainder of the portfolio has been de-risked with several pre-clinical studies already done and published.

Getting into the driving seat

From here, it’s hoped that the decision to set up a new company to take the treatments forward will begin to pay off. Through creating a spinout, the founding team anticipate that they can leverage their expertise so that the company can raise and the capital investment needed to take high-quality treatments to market.

The process has proved a steep learning curve for the academics. “None of us has a degree in business,” as Ahad points out. Nonetheless, explains Paul, they’ve had to seize the initiative: “The advice from UCLB is priceless, but while they advise and guide, they don’t do it for you – as an academic, you need to be in the driving seat.”

From UCLB’s perspective, the objective is to ensure durable success through building lasting relationships. Sara Garcia Gomez is the Senior Business Manager at UCLB responsible for Bloomsbury. “We’ve worked with Bloomsbury’s academic founders over many years. Our focus is always on enabling people to achieve long-term success. There’s no single route to follow, so it’s a question of understanding the technologies and the ambitions and using our networks and experience to help navigate the practicalities of setting up a spin-out and securing funding.”

Now that the company has formally launched, further fundraising will be a priority. As well as taking the four existing programmes through to the clinic and beyond, the company has bold ambitions for the future.

“We want to extend what we do at two ends of the pharma life cycle,” says Adrien. “On one end we see ourselves capable of running the four existing programmes through to approval and commercialisation. At the other end of the value chain, we’re assembling this team of world-class people spanning translation, discovery, regulatory approval, clinical, and commercial expertise. So we are effectively a translation engine that can potentially take on discoveries from other labs to bring even more gene therapies to the clinic.”

Whatever the future holds, it’s evident that Bloomsbury’s team will be approaching it with their foot to the floor.