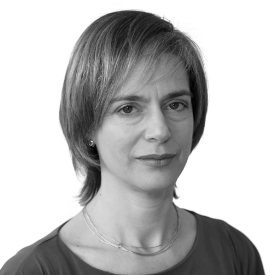 Marina has worked at UCLB for over twelve years, supporting opportunities arising from UCL’s Department of Computer Science. Marina has been at the centre of the commercialisation journeys of a number of UCL spinouts, and is responsible for the development and management of  UCLB’s express licensing platform e-lucid. Recently appointed as UCLB’s Associate Director of Physical Sciences & Engineering, Marina talks to us about her new role and her experience in technology transfer.

What will you be doing in your new role? Why was the Associate Director role introduced in your department?

It made sense to introduce a role that would provide more day to day support to Steven Schooling, the team’s Director, as his own workload has increased due to initiatives such as the UCL Technology Fund. My previous remit was focussed mainly on the Department of Computer Science; going forward I will have a wider role in representing UCLB within the Engineering faculty at UCL.

I also intend to channel focus into promoting Portico Ventures, a spinout framework now rolled out more widely across UCL, by maximizing exposure of this scheme to all eligible departments, ensuring the right communication materials and the right support for business managers are in place.

Additionally, I will be continuing to direct a separate team that works on our e-lucid platform which is slightly outside the remit of a business manager but is a project I started 10 years ago and continue to lead and be enthusiastic about.

What role were you in before coming to UCLB?

I’ve been at UCLB over twelve years now. Prior to moving into the University sector, I was director of product development for a major US telecoms company. This involved pulling together large cross-functional teams from around the business to build and launch new products into market. My team was spread across Europe and we were responsible for launching all data products outside of the US and Asia.

I started there when the company was little more than a startup in the UK; it was acquired many times during my 7 years there, growing significantly each time  (the last acquisition being by Verizon). I gathered plenty of experience on building products and growing teams that I can now share with the startup companies in my UCLB portfolio!

What lead you towards a role in technology transfer?

I then worked for a time at a start-up with a similar concept to Facebook (which hadn’t launched yet). Working with digital technologies encouraged me to start thinking about how I could use my product development background to the benefit of my ongoing love of science: to assemble people from a variety of disciplines and build products around research-led inventions.

I only then became aware of the existence of technology transfer ‘offices’ from the Imperial College alumni magazines that land on my doormat. That started me on a mission to find a role in such an organisation – that was 13 years ago and I haven’t looked back!

Why do you think commercialisation and technology transfer are such important considerations for academics today?

Historically, the contribution of academics has been their dedication to mainly the journey of research. Today, there are still academics who are fulfilled by completing novel research and being published in top journals.

‘But, I think most academics now want to see some real-life impact of their research. They want to know that their work actually delivers benefit to people’s lives, or makes the world move forward in some way.’

Our goal at UCLB centres around the application of research to real-world use. That is not to say there is no place for blue sky research, but we are really keen to encourage academics in applying their research to challenges such as optimising business processes or solving healthcare challenges.

Can you give us an example of a project you’re working on now? Why has commercialisation been such an important step in its journey?

I’ve recently finalised a licence of the SmartTarget technology to a US company called Intuitive Fusion.

SmartTarget was initially set up as a spinout, based on patents, software and documentation developed within UCL’s Centre for Medical Image Computing. The company brought to market image fusion technology allowing accurate targeting of prostate cancer under ultrasound guidance. After some time of selling the CE-approved device into UK hospitals, we realised we needed a new business model to achieve a wider adoption of the technology.

It was then that we engaged with Intuitive Fusion, a US based company specialising in the delivery of prostate care services. We have now licensed the core technology package to Intuitive Fusion.

Intuitive Fusion already had an established infrastructure in place to deliver these services to patients. The technology arising from SmartTarget will now be embedded into their standard biopsy and treatment platform, in turn enhancing patient care.

UCL has a great innovation ecosystem available to support academics? Can you give us an example of how this has helped with one of your projects?

Persuadr.ai. is a great example of this. It’s a technology that has arisen from Professor Anthony Hunter’s team in the Department of Computer Science.

We were looking to identify practical and commercially attractive applications for the technology, which uses an AI-based framework to persuade a user towards a behaviour change. UCLB helped the team apply for funding from the EPSRC Impact Acceleration Account managed by Innovation & Enterprise, in order to carry out a market study.  The study assessed the potential ‘vertical’ applications of the technology taking into consideration the propensity of those industries to adopt engagement tools such as chatbots (an obvious way to deliver the technology).

We discovered that the financial markets could be of interest. For example, advisors at the government-affiliated pensions advice service encourage users to maintain healthy financial habits; essentially to save more. If applied in this context, Persuadr.ai could be a useful tool by gathering arguments that people typically make against saving for a pension and structuring factually-based objections to those arguments to encourage behaviour-change in an AI-informed way,

With interest captured from the Money & Pensions Service (MAPS), we returned to Innovation & Enterprise for further funding under the Design to Use scheme, with which to develop a robust implementation and a Proof of Concept for MAPS.

In parallel, we have introduced the team to accelerator programs: Research Associate Emmanuel Hadoux was fortunate enough to be accepted onto the well-known Entrepreneur First (“EF”) accelerator where he has teamed up with a co-founder with a highly complementary business and marketing background.

The spinout will be eligible to have a licence of know-how and software to it from UCLB under the Portico Ventures framework.

Can you tell us about a project you have worked on during your time at UCLB that you are proud of?

When I first joined UCLB I realised the process for licensing software non-exclusively was somewhat inefficient and I knew that it could be improved by moving to an online ‘click to accept’ type model.

With nothing meeting my needs off the shelf, I obtained funding from UCLB to develop a prototype which we called e-lucid. It worked really well for the software products I was responsible for, and caught the attention of those in UCLB responsible for managing material transfers.  We developed a second version that was much more flexible:  supporting a variety of products and introducing the concept of approval and notifications workflows to allow the academics who had developed the materials to be engaged in or simply informed of, the licensing process. It also introduced the payment gateway so we could start collecting licence fees directly through the platform. This second version launched in UCLB in 2012 and soon attracted interest from a number of universities in the UK to whom we now provide e-lucid as a white-label service.

The platform has grown hugely in popularity in the last year and our ‘Software as a Service’ solution is now provided to a number of large US Universities also.

A core benefit of the system is that it allows technology transfer offices (TTOs) to engage with more academics than they normally have capacity for. Patentable technologies which have typically been the bread and butter of TTOs are really just  ‘the tip of the IP iceberg’: there are many academics creating really valuable IP that just isn’t suitable for exclusive licensing but has the possibility to make a massive impact through non-exclusive licensing. The self-service nature and automated processing of licence requests that the e-lucid platform allows for, suddenly makes it possible for TTOs to engage with this ‘IP longtail’.

The version implemented in UCLB is called ‘XIP’ (www.xip.uclb.com) and hosts everything from biological materials, to healthcare questionnaires and of course, software.

With the current coronavirus pandemic, we have been active in creating a new storefront to focus on disseminating technologies related specifically to Covid-19. This storefront has been optimised for bulk processing of licence requests (The UCL Ventura device was licensed over 1300 times in less than a week) and supports free of charge disseminations only.

I’m really proud of what we’ve achieved so far with this custom-built platform. In spite of not being able to get out to TTO conferences this year to promote it, I have high hopes for its continued popularity and relevance as more TTOs get behind supporting the ‘impact agenda’ whilst still protecting their University’s valuable IP assets.

What would your advice be to someone looking to move into a role in technology transfer?

Be aware that no two days or two projects are ever the same. Most projects I’ve worked on have been outside the ‘standard process’ to at least some degree. You have to be willing to be flexible, to go the extra mile and communicate well: the role involves a lot of mediation and guidance-giving! Whether between inventors, IP owners, lawyers: many academics are spinning out companies, talking to investors, licensees, etc for the first time and are not always aware of each party’s expectations.

I always strive for a good outcome for everyone, so I try to understand what each party wants to achieve and work towards a win-win situation that ensures everyone  (academic, UCL, UCLB) benefits appropriately from the results of the ‘technology transfer’.

Finally, it is also important to have a real interest in the technologies you are working with so you can better consider the applications of technologies. Getting exposed to such a wide variety of cutting edge technologies is really a highlight of the role. Where necessary however, you also need to be interested in and pay attention to detail. A lot of what we do involves putting in place legal agreements – although our legal colleagues write them, business managers need to understand them; particularly in order to explain to academics that are coming across them for the first time.