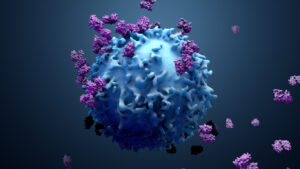 In a field where innovation is par for the course, Dr Martin Pule stands out. Featured in the award-winning 2019 BBC documentary, War in the Blood, Martin is one of the leaders of the ‘CAR T’ programme at UCL’s Cancer Institute. He is also Chief Scientific Officer of Autolus Therapeutics, playing a pivotal role in bringing revolutionary cancer treatments from the laboratory to the clinic. Autolus’ technologies are now offering hope to cancer patients who previously had few or no treatment options.

Autolus is one of many companies developing CAR T therapies. The approach involves genetically engineering a patients’ own T cells in the laboratory. By inserting a chimeric antigen receptor (CAR), immune cells are programmed to recognise and kill cancer cells. Clinical trials have shown that CAR T cells can be highly effective in treating patients with leukaemias and lymphomas which have failed to respond to standard anti-cancer treatments, as well as holding promise in the treatment of solid tumours.

However, despite the rapid advances and many successes, current T cell therapies have significant limitations. Martin explains: “We’re trying to solve a number of problems. One of the problems is how to manufacture CAR T cells more easily, another is how to make them less toxic and at the same time make them persist better.”

Autolus’ next-generation technologies aim to address these challenges through precisely targeted, controlled and highly active T cell therapies. A modular approach allows them to design tailored treatments that incorporate adaptations that give the cell specific abilities to target a particular indication, to survive for longer, or to combat features of the tumour micro-environment.

In addition to the sophistication of their constructs, Autolus are innovating in their approach to manufacturing. By optimising various elements of the product and process, they aim to improve the efficacy, efficiency and safety of their treatments. The focus on innovation at every stage is underpinned by the company’s determination to remain at the cutting-edge of T cell engineering.

The journey to commercialisation

Autolus’ potential has been recognised by investors. It was founded in 2014 with support from UCLB and additional funding from a BBSRC Sparking Impact award. A £30 million investment from venture capital firm Syncona became at the time the largest ever series A financing round for a European biotechnology company. Further successful Series B and C funding rounds were followed by an initial public offering on Nasdaq in June 2018, which raised approx. £115m in net proceeds.

UCLB worked with Martin to protect the technology, securing a suite of patents and supported the company set up process, including making introductions to potential investors. David Phillips is Senior Business Manager for UCLB, responsible for commercialising technologies developed at UCL’s Cancer Institute.

“UCLB has extensive experience working in this area of bioscience. That means we can help to broker relationships with investors to the concept as well as negotiate the company’s structure and licensing of IP from the university.”

For Martin, achieving the impact he envisioned drove the process: “I recognised that the only way to secure sufficient funding which would allow rapid technological development was through a spinout company.”

A new era for cancer treatment

The vision which spurred Autolus’ creation is coming ever closer to realisation. Their lead programme obecabtagene autoleucel (obe-cel) has been shown to be a potentially transformative treatment for adult Acute Lymphoblastic Leukemia (ALL).

Autolus CEO Christian Itin notes, “ALL is a disease with significant unmet need due to high rates of relapse, and poor prognoses for patients who fail to respond to first line treatments. The stabilisation of disease in many patients; a large number out to two years, supports the curative potential of obe-cel as a standalone therapy for some adult ALL patients.”

Obe-cel is also showing promise in an exploratory trial for non-Hodgkin lymphoma, suggesting a significant opportunity to potentially expand the benefits of this treatment to a broader population of patients with B cell malignancies.

Martin believes strongly that the potential sophistication of CAR T therapies means that they will dominate the therapeutic landscape for cancer:

“I have no doubt that in 20 years’ time, highly engineered immune cells will be the mainstay of cancer therapy. The scope of engineering possible will allow development of highly selective non-toxic treatments.”

The speed of progress being made by Autolus and others in developing these groundbreaking therapies promises huge benefits to cancer patients.