Although the initial internet search engines date back to the early 1990s, it was not until 1998 that Google Search was made available to the public. In the ensuing couple of decades the Internet has grown from around 150 million users to over 3.7 billion and search engines have become an integral part of our lives, such that we now take them for granted.

In fact, these days the very name Google has become the verb used to describe an online search.

Now imagine a technology that could tackle another class of problems in something like the same way. Well, the ‘Solve Engine’ developed by Satalia, a spinout company from the Department of Computer Science at UCL, might soon be doing just that for us.

The idea to create a Solve Engine began when Daniel was completing his PhD at UCL. With strong backing from the then head of department, Professor Anthony Finkelstein, UCLB awarded proof of concept funds for development of the first prototype and then supported the fledging idea on its spinout journey. Today Satalia is a well-known name in the data science community and employs over 50 people in London and abroad.

Why does optimisation matter? Well imagine you are the manager of a small company with one van and driver who regularly makes deliveries to a couple of dozen sites in and around a local area.

It’s fairly ‘easy’ to work out a route that enables your driver to visit each site once and return to the depot before the end of the working day. But it’s extremely ‘hard’ to find the optimal route –one that for example is the quickest and also ensures that the vehicle uses least fuel. Why is this so tough? Well, if the driver had 18 drops to make, there are 18 x 17 x 16 x …multiplied all the way down to 1, possible routes they could take. That’s over 6400 trillion potential ways to go. And if a supercomputer could calculate 1 million routes every second it would take it 200 years to assess all the options to determine the optimal route. Indeed 24 drops would take 20 billion years to compute – longer than the age of the universe!

This is a simple example of what is commonly referred to as an ‘optimisation’ problem. They are easy to spot – because they generally involve anything to do with planning, scheduling, routing or allocating of resources and are always hard to solve.

Now imagine you are not just trying to get your single van and driver around 18 sites in the most efficient way but instead you are trying to optimise the delivery routes of a worldwide logistics operation – the kind of company that gets your Amazon or e-bay purchases to you. That is when optimisation problems get really complicated.

“Optimisation is going to be an important component of business success in our rapidly growing, complex, connected, resource-constrained and competitive world… Satalia delivers such solutions by bringing together expertise and technology in optimisation, decision science, data science and software development.”

But that is not all that Satalia offers! As more companies collect and store data from their operations, they look to data science to extract information that can give better insight into what may happen in the future, thus powering-up their decision making. This branch of data science is called Predictive Analytics. Daniel explains, ‘Decision science is the crucial missing component. It will enable business to leverage the true benefits of data, data science and Satalia’s core strength, which is optimisation.’ 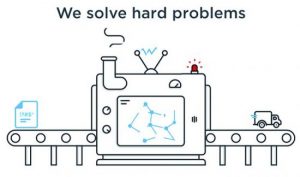 Right now Satalia’s Solve Engine harnesses thousands of optimisation algorithms so that industry can access them in simple to use ways. In fact, many businesses, right from fledgling start-ups to Fortune 500 companies and global entertainment groups and telecommunications companies to retailers, are already gaining benefit from it.

Today the Solve Engine is science fact, not science fiction. Soon we might all be able to benefit from a Solve Engine helping us make better decisions in the way we optimise the resources we have.