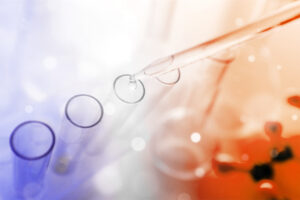 In the UK, around 10,000 people a year are diagnosed with pancreatic cancer. Though it’s not one of the most common cancers, it’s one of the most deadly. Survival rates have barely changed in 30 years, with just five per cent of patients making it past the five-year mark. But an innovative drug developed at UCL’s School of Pharmacy is offering hope of a new treatment option for pancreatic and other cancer patients.

Professor Stephen Neidle has led the work to create and evaluate the compounds, which target a form of four-stranded DNA. While most DNA is configured in the famous double-helix structure, some parts of the genome have a four-stranded structure, known as quadruplexes. This discovery enabled the UCL team including Francisco Cuenca, Mekala Gunaratnam, Stephan Ohnmacht, Marialuisa Micco, Chiara Marcelli, Richard Angell, Sally Oxenford, Ahmed Ahmed, Gavin Collie and Aaron Dale to develop novel compounds, which interact with these parts of the genome. Stephen explains:

“The active compounds were developed over a period of 16 years. With a succession of skilled and imaginative colleagues, we have been able to understand the points of aberration in certain, mostly cancer-related genes, where the genome is not double-stranded DNA. We’ve developed a strategy using drug-like compounds that bind to these areas and prevent the transition from a gene into an oncogene protein.”

Side-stepping the problem of drug resistance

It’s an entirely new approach to cancer therapy that has the potential to overcome one of the biggest challenges in cancer therapeutics – drug-resistance. Most cancer drugs target the proteins that cause cancer to spread. But molecular changes in even a small number of cells can make them insensitive to a drug. Because quadruplex-targeting compounds interact with the DNA originator, rather than the oncogene protein, resistance can’t develop in the same way. Stephen and his team have been able to demonstrate their effectiveness in pancreatic and other tumour-types including in animal models.

A licence deal agreed with US biotechnology company Qualigen Therapeutics in January will see them take forward development of the project, with the hope of getting a new treatment into the clinic. The deal came after more than a decade working with UCL Business (UCLB), beginning with the process of securing patent protection for the project’s IP. Initial studies were supported by Cancer Research and the European Union, and more recently by the Pancreatic Cancer Research Fund, the Wellcome Trust and the Medical Research Council. In 2016, the UCL Technology Fund (UCLTF) invested around £1 million as part of its Licensing Project funding stream, to help develop the technology to the point where it could be licensed to a commercial partner.

Sara Garcia Gomez is a Senior Business Manager for UCLB, responsible for negotiating the licence with Qualigen. She is positive about the advantages of leveraging UCLTF’s translational expertise:

“UCLTF funding is highly targeted towards commercialisation. That meant that when we came to licence the technology, we were in a strong position. The project was attractive to the company, as in addition to a robust lead compound, there was a focused and extensive data package, ready for them to take into the next stages of pre-clinical evaluation.”

One of the first to be funded in this way, the quadruplex-targeting project also benefited from oversight by a group comprising UCLB and UCLTF representatives, providing feedback on the direction of research and coordinating the search for commercial partners once it was clear the project was going to be successful.

Plotting a course to patient impact

Stephen will continue to work closely with Qualigen, who announced his engagement as Scientific Advisor to the company earlier this month. Taking the licensing route will mean, he hopes, a greater chance that his research will ultimately benefit patients.

“The goal is to get into clinical trial stage as soon as possible. Qualigen have the resources to do the large-scale synthesis and toxicology that are needed to progress, and that can’t usually be done by academic institutions.”

The deal will also ensure that UCL, UCLB and the inventors will receive income as a result of milestone payments as the technology progresses to market.

In an area as exacting as cancer drug development, there are no guarantees – particularly for an entirely new type of drug. Stephen is sanguine about the prospects:

“Drugs can fail at any point. If you look at pancreatic cancer, a large number of different types of drug therapy have been trialled over the past 10-15 years. And have almost all failed. So it’s very tough. But there’s everything to play for.”

Given the huge unmet need for effective pancreatic cancer treatments, it’s certainly worth taking on the challenge.