Hydrogen fuel cells have long been seen as key to decarbonisation, but high manufacturing costs have meant that until now, their use has been limited. The increasingly urgent challenge to unlock hydrogen as an affordable clean technology sparked the beginnings of Bramble Energy. From their incubation in the university, the past year has seen the company put their foot firmly on the accelerator, driven by a shared vision for a greener future.

Spun out from Imperial College London and UCL, Bramble’s co-founders, Professors Anthony Kucernak and Dan Brett, first developed their unique and highly flexible technology as part of the Carbon Trust’s Polymer Fuel Cell Challenge. Dr Tom Mason worked on the project and is now Bramble’s CEO: “Anthony and Dan recognised that one of the barriers to commercialisation of fuel cells was cost, and that it was a fundamental consequence of the materials and manufacturing process. In a nutshell, you need a bespoke factory to build them.”

Reducing costs enough to create a viable commercial product required a revolutionary change to the materials and manufacturing route. The answer lay in the printed circuit board industry. By creating products based on printed circuit boards, Bramble plugged into an existing global manufacturing base, as well as an incredible potential advantage in pace. As Tom explains:

“Everything about the printed circuit board technology is digital. If you want to change it, it’s as simple as changing a file, send it to your manufacturer and they can output it for you. We can conceivably turn around any design from concept to physically testing a stack within 10 days.”

The Covid-19 pandemic threatened to place a roadblock in their path when in March 2020 Bramble suddenly had to leave their lab space at UCL. Undaunted, the then team-of-three moved to Tom’s garage and proceeded to successfully close a Series A funding round of £5.1 million. In six months, they set up a new 13,500 square foot hydrogen-safe facility from scratch, and grew the team to 23.

Bramble’s first product, a portable fuel cell with a 15W output, launches in July 2021. Stationary power is needed for hundreds of everyday applications, from temporary traffic lights to CCTV and alarm systems, which would currently run off polluting diesel generators. By swapping to hydrogen units, Bramble’s customers not only reduce emissions, but also lower the costs of ownership, as cylinders need less frequent replacement than batteries. “Customers can put one of our systems in a field, by a river or in an abandoned warehouse”, says Tom. “They can leave it for a month without having to touch it – and they can have constant 24/7 power to that product for that time.”

The portability and low running costs of the fuel cells make them an attractive clean energy option for developing countries. Three further products are in the pipeline, with customers starting to test these higher output units in June. This major commercial milestone for the company will be backed by a distribution agreement with BOC/Linde, the UK’s largest industrial hydrogen producer. 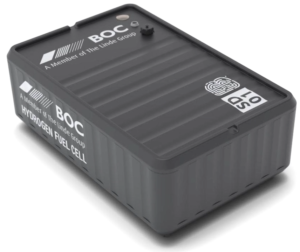 The technology’s potential as a highly flexible source of clean energy has driven Bramble’s team to explore automotive applications. A project began in December 2020 with MAHLE Powertrain to put the first liquid-cooled fuel cell stacks into a vehicle. Their fast-paced approach meant a demonstrator was built in under three months, and the vehicle is expected to be on the road in August 2021.

While other types of fuel cells are large blocks, Bramble’s are modular, meaning they can be designed in any shape or size and easily distributed. This offers significant potential for vehicles where it’s important to distribute load – such as aviation and marine. With a project already slated to begin in summer 2021 to design a version of the system for a boat, the company is eyeing multiple market sectors.

The scale of Bramble’s ambitions and pace of progress has impressed many observers. Mark Harding, Business Manager at UCLB, is confident there’s much more to come. “Bramble’s fuel cells could make a very positive contribution to the challenge of meeting our energy needs in a sustainable way. They’ve got a great technology with major social and environmental benefits, and clearly putting all those things together in a successful business is a really attractive proposition.”

Support from UCL’s Technology Fund (UCLTF) has been crucial in giving the company the breathing space to develop its products and scale up operations. Tom notes the role they played from the company’s early days:

“We had to bring together a consortium of investors to access the funds we needed, and UCLTF was the obvious place to start. They’ve been really supportive, and got the ball rolling from the seed round funding in 2018.”

Bramble will embark on a new funding round later in 2021 to accelerate the business even faster. It will allow them to grow the team to over 50 people and sets them on course to be the first profitable fuel cell company.

David Grimm, UCLTF’s Investment Director says: “Bramble Energy is a fantastic business that demonstrates not only the depth of technology at UCL but also the entrepreneurial talent being fostered there. Taking tech from a university basement laboratory and founding a thriving and rapidly expanding company is not easy, but Tom and his exceptional team are making it look simple. At the UCL Technology Fund we’ve been delighted to be on the journey with them.”

As the costs of hydrogen continue to fall, Bramble’s products could make low-cost clean energy available across multiple sectors, and on a global scale. In helping to make the shift to greener power sources easier, cheaper and faster, they have the potential to make us all winners in the race to net zero.