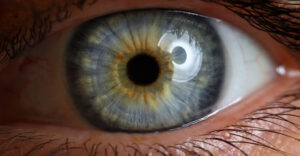 In 2015, a patient developed severe age-related macular degeneration (AMD). It left him unable to see out of his right eye. But, a few months later, pioneering stem cell therapy at Moorfields Eye Hospital restored his vision enough to read a newspaper. Surgeons inserted a patch of stem cells into his retina in a procedure that its inventors hope could provide a fast, affordable treatment for AMD – the leading cause of blindness in the developed world.

The breakthrough which restored the patient’s vision was one of the first stem cell trials of any kind to prove the concept of regenerative medicine. But it would have been impossible if the project behind it hadn’t had its own knack for regeneration. Having evolved through several reincarnations, the technology developed by UCL’s Professor Pete Coffey from UCL’s Institute of Ophthalmology, and Professor Lyndon Da Cruz from Moorfields Eye Hospital was last year given a new life in UCL Business (UCLB) spinout company TenPoint Therapeutics.

Pete Coffey began investigating stem cells in the 1990s. Inspired by advances in cell transplant therapies, he chose to look at their potential applications in eye disease:

“The eye is a great place to do cell therapies, because it’s one of the few regions in the body where you don’t need very much in terms of technology to really look into the biology. It’s easy to access and monitor, and the eye also has ‘immune privilege’ which means the body’s normal inflammatory immune response is limited there, making it a great place to research new therapies.”

Pete’s work targeted retinal pigment epithelial (RPE) cells which form one of the layers of the retina. RPE cells form a ‘support’ for the neural layer of light-sensitive cells, which start to die when it’s absent. It’s this knock-on effect which causes sight loss and results in AMD – but if the support cells can be replaced before that happens, patients’ vision can be repaired.

The UCL and Moorfields team successfully developed two clinical procedures which achieved significant improvements in acuity. But their vision was for an affordable ‘off-the-shelf’ therapy that could deliver benefits to millions of patients affected by blinding disorders. The solution was to create a patch or ‘carpet’ of RPE cells about the size of a Tic Tac on an ‘underlay’ of polymer membrane which would be implanted in the eye as part of a routine procedure. Alongside the patch, the team developed a new surgical technique and tools, and imaging techniques to monitor progress once the patch was in the eye. These innovations brought their goal into sight, as Lyndon explains:

“Transplant surgery using the patch is very straightforward. The operation involves making a small incision in the eye into which the patch is placed, then it’s pushed down using gas and air. It takes around 20 minutes and most patients are able to have it done while they’re awake, making it suitable for an outpatient procedure.”

Surviving through the challenges

Despite its potential, steering the technologies through their development hasn’t been easy. Early funding challenges meant the project nearly failed to get off the ground, before a £4 million donation from a US philanthropist saved the day. This funding, together with support from the Medical Research Council enabled the creation of the London Project to Cure Blindness in 2007, as a partnership between Moorfields, the UCL Institute of Ophthalmology, UCLB and the National Institute for Health Research (NIHR). In 2009, UCLB concluded a licence with Pfizer to the technology with a goal of developing a commercial product. The consortium intent hoped to get from bench to clinical treatment within five years. In the end it took eight years to realise their ambition – but the eventual Phase 1 trial proved worth waiting for. Results published in 2018 revealed that two patients with severe AMD had been given their sight back, making life-changing differences to their health and wellbeing.

But along the way the project suffered further setback when Pfizer decided not to continue with development of the technology and the licence was terminated. Its ability to rise once again from the flames has been in part due to hard work done by UCLB and Professor Pete Coffey and Professor Lyndon Da Cruz in repatriating the project to UCLB. Jessica Bolton, Senior Project Manager at UCLB explains:

“Pfizer terminated the licence, which subsequently returned to UCLB, but UCLB worked hard to get all the materials related to the project such as cells, equipment, clinical data and devices so that the project could continue in the new company and ultimately deliver patient benefit.”

Thanks to the ongoing support offered by UCLB, the founders of TenPoint Therapeutics are eyeing their next goal, to test the therapy on a larger group of AMD patients. With sponsorship transferred to Moorfields, they aim to complete the eight-patients Phase 1 trials and proceed to a pivotal trial. Pete is focused on the future:

“We’ve demonstrated a safe procedure, using cells that are safe, and a tremendous visual outcome for individual patients with AMD. We’re excited now about the impact that we can achieve through scaling up the programme, and hopefully introducing the therapy to the NHS and patients around the world.”

With AMD affecting over a quarter of people over 65 in the UK, and millions more globally, there will be many rooting for their success.