On Thursday 7 July UCLB hosted its annual Summer Reception to celebrate a year of successes, with drinks, canapés and entertainment from UCL’s Jazz Society set against the backdrop of the neo-classical UCL Portico and Flaxman Gallery.

The event provided an informal networking opportunity for employees and guests of UCL, UCLB, UCL Consultants and others from the industry, in order to promote the value of technology and knowledge transfer.

UCLB was delighted to welcome UCL’s President and Provost Professor Malcolm Grant, who addressed the guests with a speech about the importance and value of enterprise to UCL. The event highlighted UCL’s major strengths, including the biomedical sciences.

Dr Anne Lane, Executive Director of UCLB outlined some of the major achievements over the last 12 months. The UCLB medical device spinout company, Endomagnetics, has achieved another round of financing to progress development of the intellectual property developed at UCL by Professor Quentin Pankhurst and at the University of Houston. This company’s first product, SentiMag™, assists surgeons during the detection and diagnosis of breast cancer, and will have many other applications in diagnostics and detection.

Abcodia Ltd a biomarker company focusing on diagnostics and personalised medicine, based on the work of Professors Ian Jacobs and Usha Menon ,was established with investment from UCLB and Albion Ventures.  Abcodia has access, through UCL, to a unique resource of the samples from the more than 200,000 women who took part in the UK Collaborative Trial of Ovarian Cancer Screening (UKCTOCS), founded in 2001 by Professor Jacobs.

UCLB has also helped with the development of a device for addressing the problem of patient dehydration in hospitals and care homes. Professors Hugh Montgomery and Monty Mythen have invented a device that ensures adequate hydration even for incapacitated patients, enabling them to drink safely whilst lying down.

Professor Alex Seifalian appeared on the BBC to talk about his team’s latest work, demonstrating UCL as a leader in the field of devices for reconstructive surgery. Professor Seifalian and his team designed and built the windpipe ‘scaffold’ used in an operation on an Icelandic patient at the Karolinska University Hospital and Karolinska Institutet.

This patient had late-stage tracheal cancer and no suitable donor trachea was available. The patient’s own stem cells were seeded onto Professor Seifalian’s scaffold and a full biological trachea was grown in a bioreactor before being implanted into the patient. Because the transplant used the patient’s own cells, there was no rejection of the implant and the use of immunosuppressants was unnecessary. The operation was a success and the patient has already been discharged from hospital.

Dr. Lane also drew attention to the fact that UCLB has a much wider focus than just biomedical technologies. Reflecting the entrepreneurial spirit present at all levels of UCL, UCLB has recently established the company Thiologics, based around the work of UCL’s own Vice-Provost of Enterprise, Professor Steve Caddick and his research group in the Department of Chemistry.

UCLB has invested in Charity Checkout (now Enthuse), the charity-based company of UCL student Chester Mojay-Sinclare, and is also helping in the development of an English app for the iPhone based on the work of Professor Bas Aarts, initially to improve grammar in secondary schools.

The focus of this year’s reception was the Slade School of Fine Art. The Slade has a world-class reputation, both within and outside of the art world and although a school of fine art might not seem like the obvious place for enterprise and entrepreneurship, the Slade has been teaching these skills for ears throughout its undergraduate and graduate teaching programmes. Students at the Slade are taught not only how to develop their artistic skills but also how to present their work and how to prepare spaces in which to show their work to its best advantage. The Slade has produced numerous Turner Prize nominees and winners, and Tacita Dean, a Slade alumnus, will be the next artist to create a commission for Tate Modern’s Turbine Hall this autumn.

This year UCLB presented as gifts in a prize draw two original pieces of art from graduates of the UCL Slade School of Fine Art.

The work of the Slade’s alumni is in demand throughout the world; its undergraduate and graduate art shows are popular and well attended, and result in many sales of the work on display. Slade students are equipped not only to create new forms, but to budget, produce, display and sell their artworks – skills that are not only essential for a career as an artist, but also for all areas of business and enterprise, and this year we wanted to highlight those skills. This year UCLB presented as gifts in a prize draw two original pieces of art from graduates of the UCL Slade School of Fine Art; Kazumi Hyodo and Alejandro Cano Lasso. 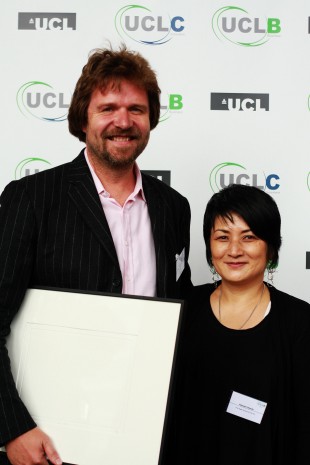 Dr Anne Lane, Executive Director of UCLB said ‘This year has been a successful one for both UCL and UCL Business. It’s a great pleasure to be able to welcome our guests, people and companies who have worked or are working with UCL and UCLB, to hear about the many diverse activites and opportunities UCL has to offer’.

We use cookies to help us improve your user experience. Find out more
Go to Top