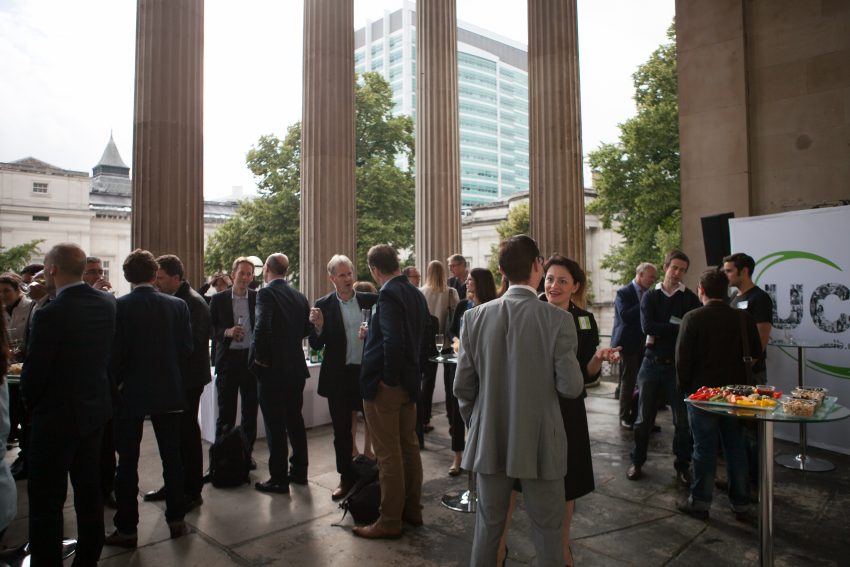 The evening was set against the backdrop of the neo-classical UCL Portico and the Flaxman Gallery. The event provided an informal networking opportunity for UCL’s researchers, guests of UCLB including representatives from UCL’s spinouts, industry, venture funds and many other collaborators.

UCLB’s Managing Director, Mr Cengiz Tarhan, addressed guests and outlined some of the company’s major achievements over the last 12 months, including the formation of the UCL Technology Fund and the Apollo Fund.

Mr Tarhan then welcomed Professor Geraint Rees, Dean of the Faculty of Life Sciences at UCL, who presented this years winners of the UCL Business Award and the One-to-Watch Award with their prizes. 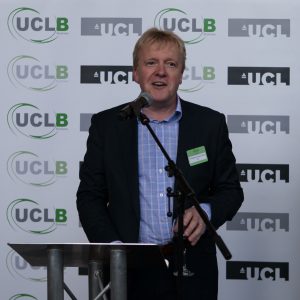 Professor Geraint Rees (Dean of the Faculty of Life Sciences)

The UCL Business Award was presented to Professor Robin Ali for his work on Athena Ltd, a biopharmaceutical company focused on the development of gene therapies to treat a range of devastating eye diseases causing blindness. Athena has entered into a global partnership with MeiraGTx Limited to develop and commercialise Athena’s ocular gene therapy programmes. Story here. 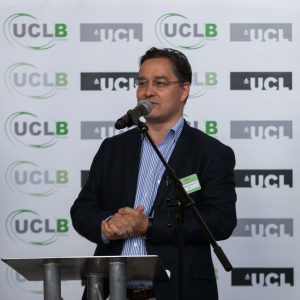 MediaGamma Ltd were the winners of the UCLB One-to-Watch award. A data science spinout from the Department of Computer Science, MediaGamma has built an Audience Decision Engine, where the “Audience” are viewers of online ads. The Decision Engine uses Machine Learning to provide information to digital ad trading platforms about the expected behaviour of a person potentially about to view that ad. This helps to inform the real-time decision-making process of the bidding algorithm as to whether or not to show a particular ad to a particular person. The company was founded by UCL’s Jun Wang and CEO Rael Cline and is the first recipient of Proof of Concept funding from the UCL Technology Fund. Story here. 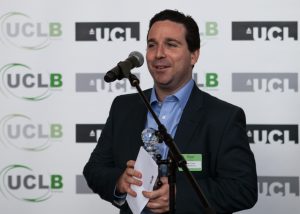 The presentations were wrapped up with the winners of the UCLB prize draw. This year’s winners were Nick Wood, EuroTempest, and Professor Deborah Gill, UCL, who both received an exclusive signed print from the UCL Slade School of Fine Art.

About UCL Business PLC
UCL Business PLC (UCLB) is a leading technology transfer company that supports and commercialises research and innovations arising from UCL, one of the UK’s top research-led universities.  UCLB has a successful track record and a strong reputation for identifying and protecting promising new technologies and innovations from UCL academics. UCLB has a strong track record in commercialising medical technologies and provides technology transfer services to UCL’s associated hospitals; University College London Hospitals, Moorfields Eye Hospital, Great Ormond Street Hospital for Children and the Royal Free London Hospital.  It invests directly in development projects to maximise the potential of the research and manages the commercialisation process of technologies from laboratory to market.